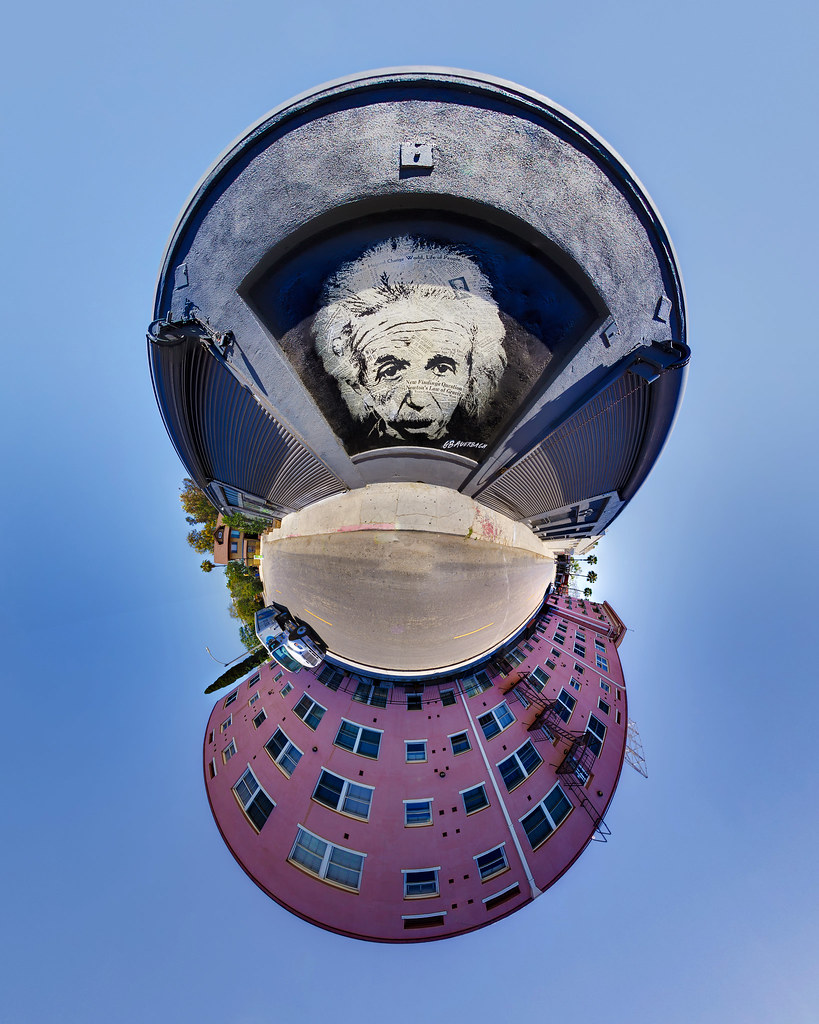 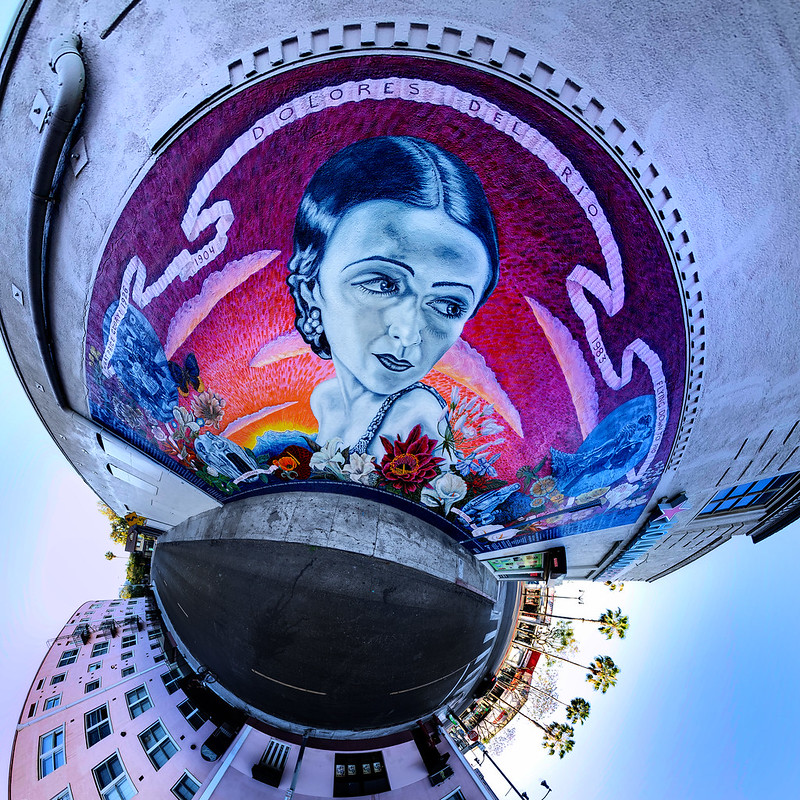 “Dolores Del Río” is part of SPARC’s Neighborhood Pride Mural program, whose intent is to create and represent the various cultural identities throughout Los Angeles neighborhoods. While it may not be a stretch to fathom how a 1920s movie star can be representative of Hollywood, the significance of the mural lies much deeper than the glitz and glam of the city. “In [the] Hollywood film industry, white supremacy is very mainstream,” de Batuc says. So when de Batuc responded to the call for artists for the Neighborhood Pride Program, he knew “that the subject matter was going to be Mexican—not necessarily about Mexican culture but about someone who was Mexican and contributed or was a prominent member of the Hollywood establishment in the past.” “That’s why I chose Dolores Del Río, de Batuc continues. 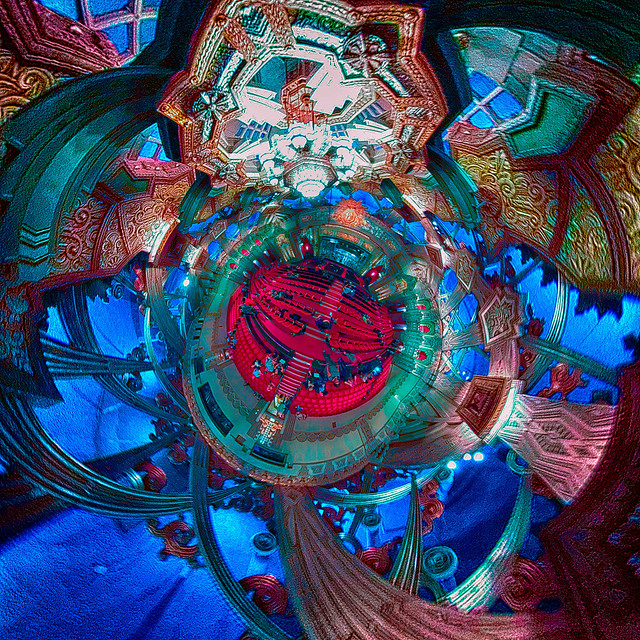 Little planet stereographic projection of the Pantages Theatre auditorium in Hollywood located at Hollywood Blvd and Vine St. The Pantages opened on June 4, 1930 and was designed by architect B. Marcus Priteca. It was the last theater built by the vaudeville impresario Alexander Pantages.

Cooling off on a hot summer’s day in the courtyard fountain at Hollywood & Highland. 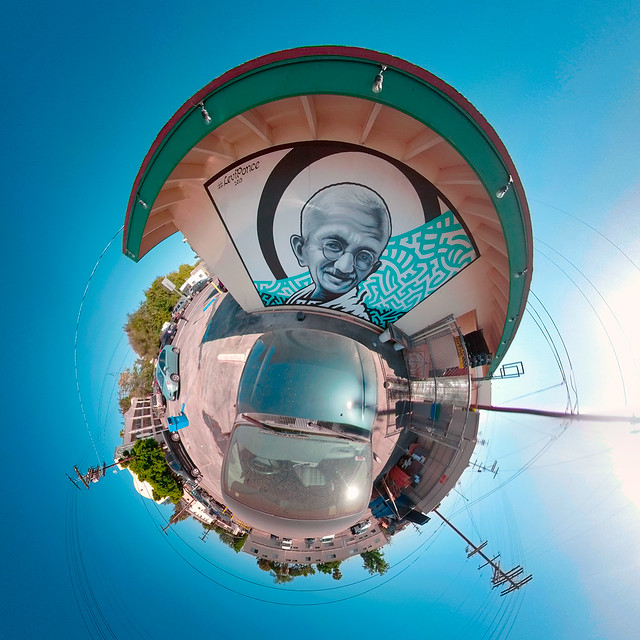 Follow Your Heart is my go to place whenever I’m in the west valley. I love it here. In addition to the healthy food you can enjoy in the cafe, there’s a hidden gem: local boy Levi Ponce created a beautiful mural in the back so be sure to go around outside and have a look! It’s a portrait of Gandhi, who once said “Where there is love there is life.” 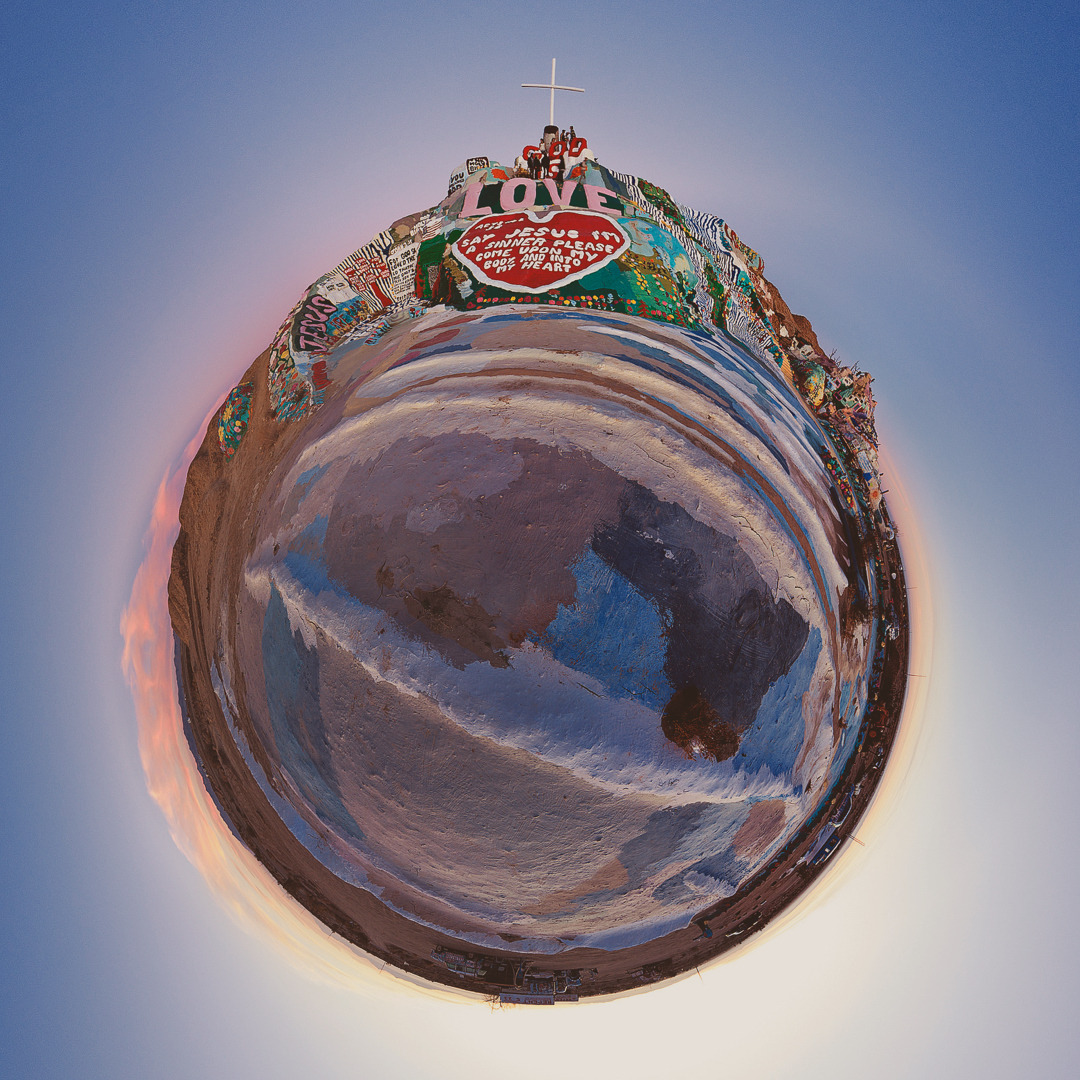 Planet Love… Salvation Mountain is an interactive art installation by Leonard Knight. In 2000, the Folk Art Society of America declared it “a folk art site worthy of preservation and protection.”

IVRPA 2018 - Closing Dinner at the Miraikan

Kazuhiro Kageyama is one of the earliest panoramic photographers from Japan who shot with film back in the day. Held up for the camera is a large panoramic poster for a JR Fukushima advertising campaign from 2001, showing trains from all over the country.

In the late 90s my father went to Japan to work as an art director for Universal Studios Japan located in Osaka. He taped several photos together of the project as it came together into different stages of development with Scotch tape. He said he learned to do it from the Japanese team. Well, if you look down on the table in this picture, Kazuhiro has several panoramas taped together from the 90s with Scotch tape! 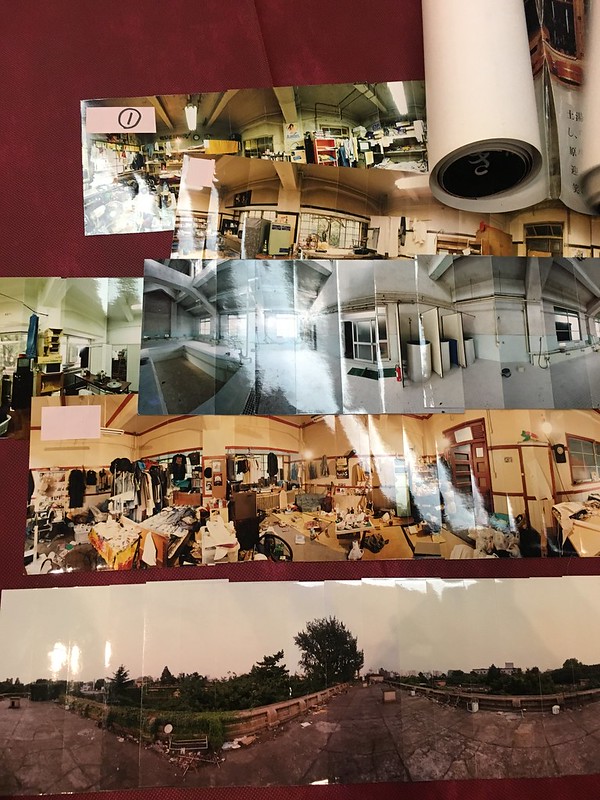 In this video, California state park ranger Andrew Fitzpatrick gives a tour of Mitchell Caverns, located in a remote stretch of the Mojave Desert east of Barstow. Mitchell Caverns are the only limestone caves in the California State Park system. After being closed for nearly seven years due to major infrastructure upgrades, Mitchell Caverns reopened in November 2017. LPT: Reservations are required so don’t just show up and expect to get a tour. They’re limited to Friday through Sunday, 2x’s each day with only 15 people each. Also, no tripods are permitted to protect these fragile formations so the Ricoh Theta was the perfect solution. Check out more 360 photos of Mitchell Caverns on Google Maps here: https://goo.gl/U4KVEk

Hidden in a remote stretch of the Mojave Desert east of Barstow, Mitchell Caverns are the only limestone caves in the California State Park system.

After being closed for nearly seven years due to major infrastructure upgrades, Mitchell Caverns reopened in November 2017. I went this past weekend and it was amazing! There were spectacular and intricate limestone formations including stalagmites, stalactites, helictites, lily pads, draperies, curtains and cave coral.

LPT: Reservations are required so don’t just show up and expect to get a tour. They’re limited to Friday through Sunday, 2x’s each day with only 15 people each. Also, no tripods are permitted to protect these fragile formations so the Ricoh Theta was the perfect solution.

This weekend Goya’s Stage C will transform into a 360-degree micro-theater inspired by FX Network’s Legion. The theater will feature an artistic video installation and multi-sensory experiences that are meant to put viewers in the mind of the show’s protagonist, David Haller. The visual art will leave visitors questioning what is real and what is not as they are transported to a “mind-bending, reality-shifting world.”

The display was created by Marco Brambilla, a visual artist based in New York and Berlin who is known for his use of new technologies and found images.

“Our aim was to create an experience that would take the viewer through multiple levels of Haller’s altered states of schizophrenic consciousness,” the artist said, according to Awards Daily. “A flood of moments, thoughts, and memories are reflected into fragmented mirrored surfaces, these kaleidoscopic reflections completely surround us and we have the sense of assuming the characters’ psychological POV. I produced ‘Fracture’ with THE MILL, the world-renowned Visual Effects & Design Company with whom I’ve worked with many times before. Working together, we were able to achieve start-of-the-art production values for this immersive experience.”

Monday 26th March 2018
Los Angeles street artist David Choe collaborates with Joe To, and DVS1 with this piece located the alley behind the Denver Center of Performing Arts. Choe is most known for his work at Facebook HQ when in 2007 CEO Mark Zuckerberg commissioned him to paint the company’s office murals. Instead of cash payment, Choe received company stock, His shares were valued at approximately $200 million on the eve of Facebook’s 2012 IPO.

The Enchanted Forest of Light at Descanso Gardens 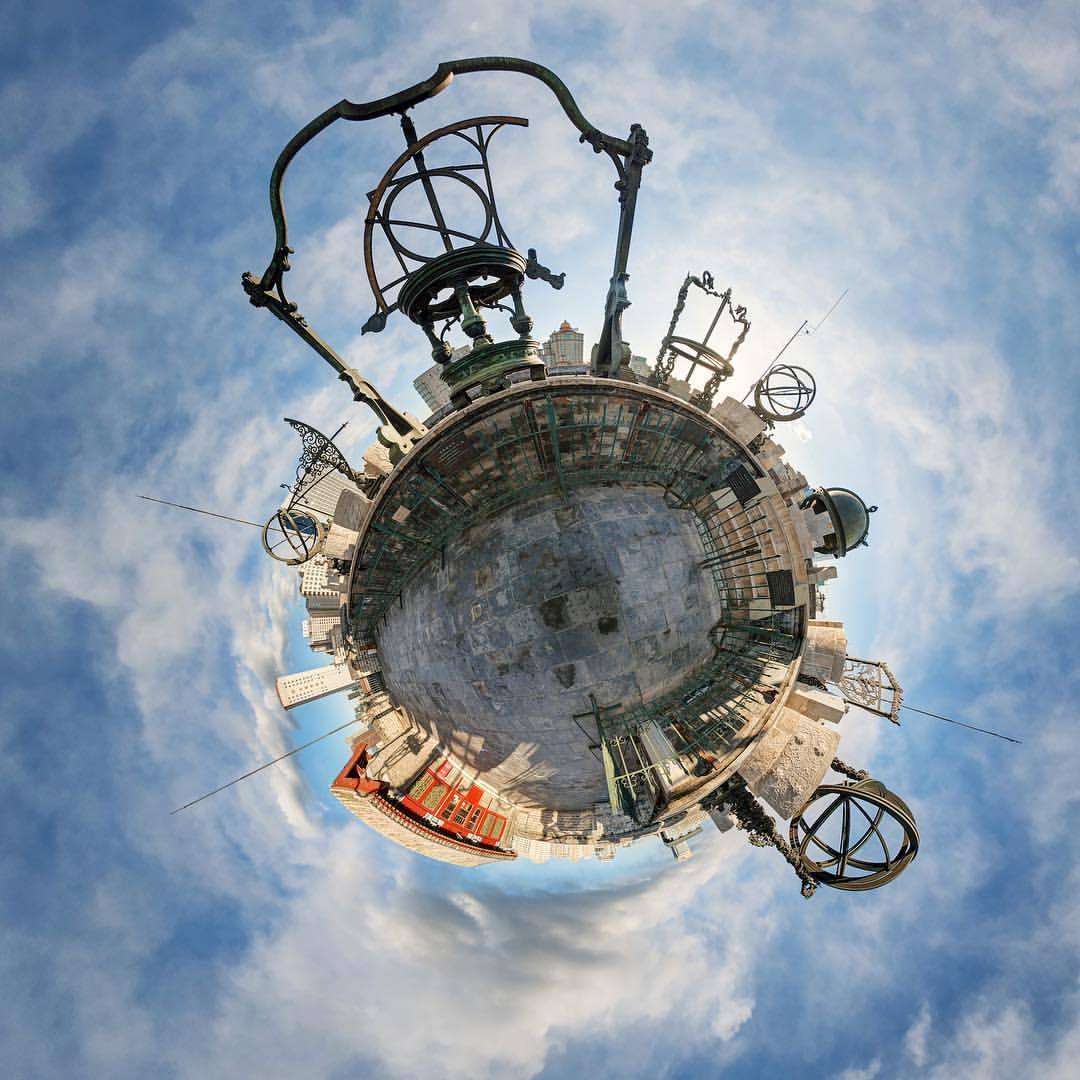 The Pink House by @TheMostFamousArtist

The Pink House in Los Angeles

Please click and copy the link shown in the box below. You can enter this link into your favourite RSS news reader app or an online service like Digg.

Once subscribed to the RSS feed, you'll get notifications about new blog posts.